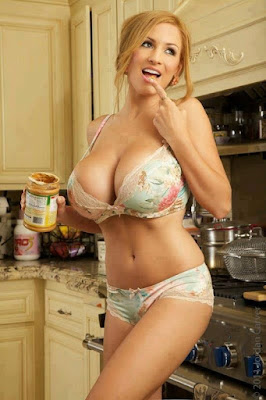 Grace skewered the olive from her martini and, placing it between her lips, sucked out the pimento. “I'll tell you what worked with husband number three,” she said casually, still eyeing the waiter. “I told him I wanted to try it the other way around.” Macy's eyebrows came up. “The other way around?” “Yeah. You know, in my bum.”


A “Quicky” by Jo-Anne Wiley

“I don't know,” Macy loaded up her fork with lettuce, “there just isn't an panache anymore.”
“God, tell me about it.”

Both women were aging foot-soldiers; stragglers from the sexual revolution. Both had married well, habitually. Macy was on number four and her friend Grace tallied five. Each divorce had been carefully calculated and neither woman would ever have to work again.
“The waiter looks nice. Maybe he could prime your pump.”
“Younger men are so inconsistent.”

Grace cast a wistful look in the waiter's direction. “I know what you mean,” she said without conviction.
Both women were well past their prime, but on the whole, they had aged well. Exercise, weekly massage and a membership at the tennis club had helped. And then there had been the prerequisite tucks and lifts when they had hit forty.(Sex Stories)

“I just wish he'd come home one night and bang the hell outta me, you know?”

Grace skewered the olive from her martini and, placing it between her lips, sucked out the pimento. “I'll tell you what worked with husband number three,” she said casually, still eyeing the waiter. “I told him I wanted to try it the other way around.”

Macy's eyebrows came up. “The other way around?”
“Yeah. You know, in my bum.”
“You did that? With number three?”
“Yeah. A friend told me how and I figured I'd give it a try. It wasn't so bad...”
“A friend?”
“It was Reggie; you know, at the hairdresser's.”
“Reggie? He's queer.”
“You're not listening to me. Think about it, sweets...”
“Oh shit.”
“Exactly. Who better to ask?”
Macy thought about it for a moment. “Wasn't husband number three the one you caught screwing the housekeeper?”
“Naw. It was the babysitter.”
“Wait a minute. You don't have children.”
“And that's exactly what I told the judge. It was the largest settlement I ever got.”
Macy dug through her salad, looking for the promised chunks of smoked salmon. Didn't find much. “I don't know. Anal sounds so, barnyard somehow.”
“Well it worked for me, for a while anyway. Hey. How about some sexy underwear?”
“I got a drawer full of overpriced frilly crap.”
“No. I mean some real sexy stuff. You know: raunchy! Like a peek-a-boo bra, or perhaps a crotchless pair of panties.”
“Sheesh. I wouldn't be caught dead in one of those shops.”
“No silly. I'll lend you a catalog. You can shop on line.”
“Really.” Marcy brightened. “Well I guess it wouldn't hurt to take a look.”

The bra was actually delivered in a plain brown wrapper. What a hoot! And the guy from UPS came to the door and didn't have a clue as to what he held in his fingers. The fun had already begun.

That night, at bedtime, Macy went into the bathroom to try it on. Harry was already tucked in with the Wall Street Journal.(Erotic Stories)

At first, Macy thought it was too small. It felt like her tits were parked up on a shelf. And the cups seemed to squeeze her nipples, plus a good deal of puffiness, out through the holes in front. It wasn't peek-a-boo... more like check out the bazookas! The look was crass and tasteless. But she shrugged. Maybe crass and tasteless was what it took. She pulled on narrow black panties and a lacy cover-up and turned to walk toward the bedroom. Her tits led the way.

Harold wore stripped pajamas and had his nose buried behind the paper. He wore his black rimmed reading glasses. Macy came around the foot of the bed and waited to be noticed. No such luck. She waited some more.

Harry turned a page. The price of fuel had spiked again and he had lost a bundle when the stock he held in American Air took a nose dive. Abruptly, Macy's lacey cover-up struck him in the face. “What the hell!!?” The corner of his paper flopped down and a surprised Harry was struck speechless by the sight of his wife's extended boobs

Macy parked hands on hips and thrust out her chest, though it wasn't particularly necessary. Harry's jaw dropped and then he smiled. “Oh my dear...” he said. And then he did the unthinkable. He couldn't help himself. He started to gag.

He knew he shouldn't, but once the first chuckle had escaped his lips, there was no going back. “Cupcakes, you look lovely...” and that was it. To his own dismay, he crumbled the paper and leaned forward, his body trembling. He tried to resist, screwed up his lips and held his breath, but it felt like his insides had expanded to the point they were about to explode. He tried, he really did, but his eyes had already teared up and he couldn't hold it. God! He burst out laughing.

“I'm sorry... I'm sorry...” he attempted, rolling to one side and holding his belly.
“Harry...?”
“Oh my... oh my... oh my...” Harry tried to catch his breath. He turned to his wife, apologetically, got another load of her tits. And he started laughing again.
He slapped the covers of the bed with an opened hand and rolled to and fro and a startled Macy began to gather steam.

“Augh! I'm sorry,” Harry, with tears now dripping freely from his chin and his body racked with spasms, saw the look in her eyes through steamy glasses and heaved again. Still spluttering, he rolled onto his side but misjudged the edge of the bed.

There was a startled yelp and Macy watched his flailing arms and legs disappear over the side; the bed-sheet followed after him. She heard a resounding thump when he hit the carpet. And then, unbelievably, he started laughing again.

Macy stepped around the side of the bed. He managed to raise his head. His cheeks were bloated and flushed. An arm of his reading glasses had come adrift from his ear leaving one lens hanging about his cheek, the other skewed across an eyebrow. He was flopping around like a beached trout.

Macy got a hold of his pajamas collar and forced his head down. She got a knee into the small of his back, and happily, applied some pressure. That seemed to help. He finally took a breath, hiccuped, expelled one last snort, and lay quiet.

“Well? What happened?” Grace stood at Macy's backdoor holding a bag of carrot muffins.
“He laughed,” Macy said bitterly and she led the way to the kitchen and the coffeemaker.
“You're joking. He actually laughed?”

“Geez. I thought for a moment he was going to have a friggin' stroke. Right there on the bedroom floor.”
“So what did you do wrong?” Grace asked, accusingly.
“Wrong? The only thing I did wrong was listen to you!”
“If you'll remember, I suggested something entirely different.” Grace paused. “So let's see this damned bra. I can't imagine what Harry would find so funny.”

Macy humped her lips and went to retrieve the bra from the drawer in the bathroom where she had hidden it. She returned with a pink box decorated with a tiny bow.

Grace opened the box and pulled the black satin free from the tissue paper; held it up by the straps in front of her face. “Well... well...”

It was a lovely bra. An exquisite little number: black lace with two delicious slits in front to let the girls peep through. There was a discrete under-wire to give lift and the bra was trimmed in intricate bead-work. It was held together with a catch at the front, in case it needed to be jettisoned in a hurry. Perhaps by a clumsy man.

“This is beautiful,” Grace said, turning the skimpy fabric in her hands. And I know you have nice boobs. So what would Harry find so funny?”

Macy shrugged a shoulder. “Beats me. But I'm sure it wasn't anything I did. My other husbands would have been all over me. Do you think my Harry may have some sort of problem? Maybe he should see a doctor.”
“Was he sober?”
“Of course he was fuckin' sober. He was reading the Wall Street Journal, for Christ's sake.”
Grace sat a moment. Let that one settle in. “So now what?”
“Toss it, I guess...”
“What? The bra?”
“I'm not going through that humiliation again. Not ever.”
“You're going to throw it out... into the garbage.”
“I'm not going to donate it to the Sally Ann!”
“Well if you're just going to throw it away, at least lend it to me first.”
“You?”
“Well sure. It should fit and, to tell the truth, I'm a bit curious. Aren't you?”
“Curious?”
“It would be kind of interesting to find out if I get the same reaction. You know, a belly laugh.”
Macy waved a dismissive hand. “You want it? Then be my guest. Take it.”

He tidied his desk, locked up, and strolled down to the parking lot. Macy would be watching television; the one night in the week she didn't have to worry about preparing dinner.

Harry drove across town and got himself parked. He got out from behind the wheel of his Mercedes and made his way along the sidewalk and up the steps. He rang the bell.

“Oh my dear...” he said when Grace opened the front door, her breasts looking like strategic missiles, nipples honed-in on the incoming target. His penis pushed at the front of his trousers. Harry opened his arms and she snuggled up, rotating her hips suggestively against his groin. He chuckled lightly. “You won't believe this, Gracie, but my wife has a bra just like that.”