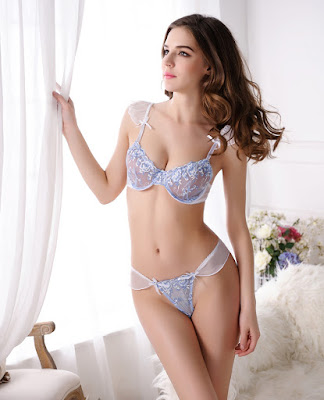 
It was Friday night and I was waiting for my husband Mark to get home from his nightly meeting. We were going to go out dancing at our favorite spot. I was getting dressed in my comfortable blue denim shirt and jeans, when the phone rang. It was Mark, "He told me that he didn't know when he would be home, probably not until late." I hung up the phone and started getting undressed; I was just going to stay home. No, I should go out and have fun I thought. As nasty thoughts went through my mind, I started getting dressed, for a night out on the town. First I put on my naughty little silk thong and my black see through lace bra. Then I put on my light blue extremely low cut form fitting top and my short blue mini skirt. MMMMM I felt just like a little whore! I asked myself, "What kind of fun would I have tonight?" My panties were getting moist just thinking of all the possibilities. (Sex Stories)

When I got to the dance club, it was packed so tight. There was standing room only. I went to the bar and got a drink to help me loosen up a bit. After I finished the drink, I was asked to dance by an older gentleman. He was of a medium built and close to my height. We went out to the dance floor and started dancing. It was so crowded out there that we had to dance tightly together. I didn't mind at all though, I could feel his cock growing and bulging in his jeans. He was so hard! I thought he was going to fuck me right then on the dance floor. MMMM my pussy was so wet now! It was hard to restrain myself. After the dance was over he brought me back to the bar and we started chatting. He told me that his 21 year old son will be coming here soon. His son is a trainer pilot for a 747.

MMMM, this man was so HOT! He was well built, dark skinned, and handsome. My eyes went immediately to his crotch area. His penis was bulging out. MMMM I wanted it so much! I wanted to see what it would be like to fuck a good looking, younger, man like himself.

Then I turned back around to talk to the older man and to take a drink. While facing the bar and drinking, he said he would like to introduce me to his son Jim. I turned around and MMMM it was him, the guy I saw standing at the door. Jim said, "HELLO" in a deep, sexy voice. I said Hi my name is Katie. Jim asked me if I would like to dance. I told him sure!

Well, with my body inside and out burning for Jim's cock. I told him that we should probably be going. He helped me to the car and opened the car door on the passenger side and sit me down on the seat. He again massaged my breasts slowly, and gently. He told me that they were just perfect. I told him I was happy that he liked them! He took my hand and gently brushed it on the outside of his pants. I could tell that Jim was getting very horny and that he made me extremely hot! I knew that I shouldn't be feeling this way about him, but I wanted him badly! Jim said "We should get you home." He then went around and got into the car and drove me home.

Well, when we reached my home, I wanted to thank him for bringing me home safely. I told him to come in for a minute and I would give him cab fare for going home. Jim sat on the couch in the living room and waited for me to return. When I came back into the living room and tried to give him the cab fare, he pulled me close and kissed me. My whole body was getting an enormous electrical shock throughout.

While he was kissing me, he reached up under my skirt. Next thing, I knew he was rubbing the outside of my pussy. Jim told me how soft it was. I keep her well shaved except for a small area at the very top. She was so wet and was aching for that cock. Even though it felt so good for Jim to be touching my pussy, I tried to get away. I told him that I should show him out now! My husband would be home soon! Jim said that he only wanted to see and feel my warm pussy wrapped around his cock. Jim then started fingering my clit with his thumb. MMMMM, this is my favorite spot to have touched. A sense of great relaxation spread through out my whole body. I started feeling almost num. Jim told me that I was a good wife and he wanted me to fuck him. I told him NO, it does feel wonderful, but I am a married woman and shouldn't be doing this at all. When his finger was good and wet from fingering me, he took it out and made me taste my own pussy juice. MMMM, it was so sweet and his finger had a wonderful aroma on it. He then finger fucked me again and stuck his fingers in his own mouth afterwards. MMMM he told me, "I was the sweetest woman he had ever tasted before." I was like eating a juicy ripe peach. He then started using 3 fingers to fucking my moist hole faster and faster. God I was getting so turned on. I could feel my pussy aching and wanting more. I tried to get him to stop fingering me but he was holding me so tightly against him. I couldn't even move! I felt so guilty being this wet and aching for his cock. Then, Jim stopped fingering me for just a moment. Jim then placed me on the couch, held me down with his body that was on top of me. He then starts taking my top while still holding me tightly down. MMMM Jim says, Your tits are so round and firm. He takes off my bra and sucks each mound in his mouth. MMMM, I couldn't help from moaning, it felt so good! I was hoping to that maybe he would eat my pussy, since his mouth has great sucking power like a vacuum.

He then undid his fly to his blue jeans. He took his cock out! It is rock hard and so thick, with huge veins all around it bulging out. He puts his cock in between my breasts and pulls my head up and f***es the tip of his cock to go inside my mouth. I have an extremely hard time getting his cock in my mouth. I almost gag, and ask him to please stop! Jim says, "You know you want this piece of meat . He picks me up and undoes my skirt and lets it fall to the floor. I am still wearing my panties, however. He then bends me over the arm of the couch. He then pulls my panties up inside my pussy and ass extremely tight. Then he takes off my panties and uses them to fuck me. He puts my panties around his fingers and pushes them in me slowly and deep. So that when he is done, he draws his fingers out of my pussy and it is just dripping with my juices. He takes my head and makes me lick it all off of his arm. MMMM, I never knew I could have this much juice inside of me and even still be wet inside.

Jim then lays me on couch with my ass in the air and with my head on the pillow of the couch. Jim just starts pushing his cock deep in me and giving me a deep, fast strokes in and out of my pussy. Just about this time my husband Mark gets home from work. He comes into the kitchen through the garage entrance. He is very quiet with the door and such because he doesn't want to wake me. Surely, I’m fast asl**p by now. He starts hearing some moaning as he is in the hallway next to the living room. He kind of peaks around the corner so that no one will see him. OH MY GOD, Mark thought to himself! I can't believe my eyes. He thought that maybe he was dreaming. He wasn't though, his wife was in the couch fucking a stranger and he immediately starts stroking his own cock and it starts growing in size, just watching us.

Just then, Mark came into the front room, clapping and whistling at the hot show he had just seen. Oh boy, I was so embarrassed of what had just happened, but shocked at Mark's reply seeing us both naked. I was even more shocked by the reply that Mark made next. He asked Jim if he would come back another time so he could have a better show of him fucking me. Jim's reply was, "SURE, I would love to fuck your wife anytime".