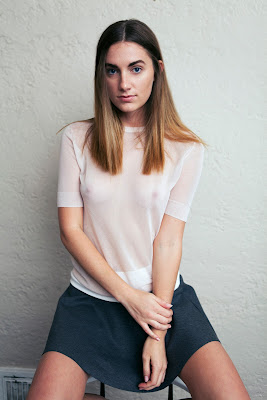 Anyway, my leave was coming to an end, so I was in the middle of looking for a nanny when my next adventure began. (Sex Stories)

Watching Courtney jerking off brought out the evil in me, and before I knew it I had taken off my shorts and rolled my shirt up over my milk enlarged breasts. I planted my feet on the ground, straddling the chair and began to lift my hips in the air as I stuck another finger in my ass and one in my dripping pussy. As I watched, I thought Courtney’s head was going to literally explode. This made me take it to the next level. I made eye contact with Courtney, made sure he saw my lips and I spoke the words, “come here and fuck me.” This brought Courtney to a screeching halt as I do not think he truly believed his eyes, so I said the words again, “come here and fuck me.” Courtney didn’t hesitate now; he quickly gathered himself and rushed for my back yard.

As Courtney was heading over to me I decided to get dressed. I thought he would have some fun taking my clothes off himself. He came into my back yard wearing a t-shirt and a pair of jogging pants, which were now barely holding back his rock hard cock. I was very pleased with my decision as I glanced at what looked like at least an 8 incher in his pants. Courtney smiled shyly as he approached and told me, “I saw you through my window and thought you could use some assistance.”

I smiled at him, kissed his cheek and told him that I did have something stuck in my throat and perhaps his snake might be able to dislodge it. With those words I sat onto the lounge chair pulling down his pants as I descended. Courtney’s huge cock sprang from its holder, hitting my cheek as I sat down. I grabbed it with my hand and began stroking it in long slow strokes. He let out a low moan that let me know that it has been awhile since he had a blow job. As I stroked his cock I lifted it and began sucking his sagging balls. The musty taste instantly got me dripping. I took one ball in my mouth then the other. I let them go and moved up to his cock. I licked the shaft and when I got to the head I only took it in my mouth, sucking on it hard and building up the pressure.

Oh God were the only words coming from his mouth so I knew it wasn’t long before we had lift off. I released the head of his shaft and spoke to him, “Courntey, I have been a bad girl,” I told him in my best little girl voice. “I was touching my naughty places. Will you fuck my mouth and teach me to be a good girl for you?” Oh yes oh yes you fucking whore was the only response I got before he grabbed my hair by the ponytail on top and shoved his cock deep down my throat. The suddenness made me gag a little and Courtney said, “take it all you whore, you suck daddy’s cock.” The man in Courtney was out and the sweet widower was no where in sight, good.

Courtney got my head into a rhythm bobbing up and down on his cock as he continued his verbal assault. “I’ve seen you”, he said, “I’ve seen you with those Mexicans. You’re a Mexican whore. You like all those wetback cocks in you. You like their cum all over your face?” I could only mumble the MMMM sound as his cock continued its attack on my throat. “I’m going to shoot my load down your throat just like all those Mexicans but you better not swallow. I want to see it in your whore mouth.” I don’t know where this new Courtney came from but holy shit I came at least twice during his face fuck.

He stuck his cock back into my mouth and told me to swallow his load, but as I started to swallow his sperm filled goodness he began to piss down my throat. The shock of what he was doing made me start to choke and as I gasped for breathe Courtney’s cock slipped from my mouth. He grabbed me by my pony tail and lifted my face to his cock as I coughed and tried to catch my breathe. My situation did not seem to deter him in any way as he continued to piss on my face and in my mouth saying as he sprayed away, “There you go whore. Now you smell like a Mexican whore.” As his piss ended, so did my coughing episode. Courtney took his piss covered cock and began rubbing it on my face. He then told me to open my mouth. The shock of the situation made me hesitate and Courtney smacked me across the mouth. I open wide quickly and back his cock went into my mouth. “Lick it clean whore. Lick it all clean.” I did the best I could to get the cum and piss off his cock and when he was satisfied with my work he took his cock from my mouth and gently grabbed my cheeks. He raised my face up so that I was looking at him. And as he gently stroked my cheek with the other hand he told me, “You were fantastic Jen. Now that we have done this you are now my whore. You will fuck who I want when I want. You will fuck those dirty Mexicans when they come around and my friends. You will not fuck your husband unless I give you permission. You are my whore do you understand?” I nodded yes because I was truly mesmerized by what was taking place and also by the fact this whole episode was the hottest moment of my life. I never felt like this before and I knew with Courtney leading me the sexual adventure would only continue to improve.

As I stood I told him I loved him and he said he knew that I did. He said that he loved my mouth but that I would have to prove myself to him every day. He slowly led me to my older sons swing set as the sound of leaf blowers grew louder in the distance. He raised the chain on the swing, until the swing itself was at waist level. He pulled off my piss covered shirt and placed it in my mouth. He told me to drop my panties and he smiled as he watched them hit the ground. The smile grew as he rubbed my left tit and told me to bend over the swing and stay there until he returned. I did as he said but began to get nervous as the leaf blower sound continued to increase, signaling that the landscapers were here to do the yard.

As I watched through my legs I saw Courtney walk around the house. Within a few minutes the leaf blower sound stopped and Courtney returned with four of the landscapers following closely behind. I stayed where I was scared to move and dripping wet. Courtney stuck a finger in my pussy took it out and knelt in front of my face. Courtney began to whisper to me, and as he did I felt the cold hands of the landscapers start to move all over my body. One grabbed my tits, pinching my nipples too hard. Another finger fucked both my pussy and asshole and the other two just rubbed their calloused hands all over my smooth body. Courtney whispered, “These Mexicans are going to borrow you for awhile while I shower up. Show them a good time. I am going home and I will call your sitter. I want you over to my house tonight. Some of my friends are coming over to play cards and I want to show off my new prize.” I moved to kiss Courtney as one of the Mexicans began to fuck my pussy from behind. He grabbed my hair twisted a little bit and told me, “I don’t kiss whores. See you tonight.” He then stood up and told the landscaper to have fun but to not forget they agreed to do his lawn for free after they were done. The last thing I heard was one of them saying you got it sir. He then placed his massive hands over my ears gripping my head and inserting his cock into my mouth. I fell into a state of bliss after that, getting fucked every which way on my son’s swing set. But that’s another story.