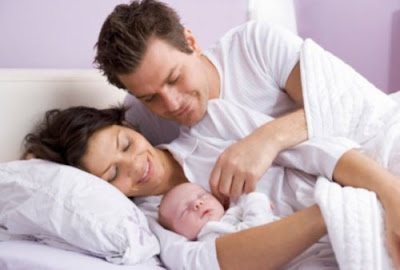 I was as nervous about having sex the first time after giving birth as I was about having sex the first time ever. Many of the thoughts running through my head in the moments leading up to the blessed event were also the same: "This is going to hurt really bad. We are definitely keeping the lights off. OMG, what if I get pregnant?!" And the sex itself was equally awkward and fumbling. Perhaps more so—since my first time ever didn't come with a side of gigantic, painful, milk-filled boobs. My anxiety was not unique, of course. While my friend Lisa was being discharged from the hospital, the doctor dropped by to check on her and deliver the "nothing in the vagina for six weeks" spiel. On the way home in the car, her husband mumbled, "Six months without sex is a long time." Lisa confesses she almost didn't bother to correct him. The very thought of sex can be daunting when you just had a human come out of your body. But while getting it on may now be the last thing on your mind, that won't be the case forever. You will have good sex again, and knowing these truths can make reentry (sorry, couldn't resist) more pleasurable for everyone.

1. It's probably not going to feel so good at first:

One friend referred to her first time postbaby as a blowtorch going where the sun don't shine. And she had a C-section. Yes, even if your nether regions weren't harmed in the delivery of your baby, postpartum hormones can cause trouble down there. "The assumption is that the pain is from the trauma of delivery, which it definitely can be, but it also has to do with low levels of estrogen that affect the elasticity of the vaginal tissues," says Rebecca Booth, M.D., a Louisville, Kentucky, gynecologist and author of The Venus Week. Estrogen levels drop right after giving birth and remain low while breastfeeding. "When a woman is nursing, especially in the beginning, the decrease in estrogen combined with high prolactin and oxytocin levels can mimic menopause for the first two to three months," says Dr. Booth. "Think night sweats, hot flashes, vaginal dryness, and often pain." When you're ready, which may not be in six weeks, by the way, have some tools on hand. The top three suggestions from the moms I spoke with: a glass of wine, a sense of humor, and plenty of lubrication.(sex advice)

2. There's a good reason you're not into it:

Lack of sleep, a changing dynamic between you and your partner, and perhaps some body image issues as you realize that belly ain't gonna flatten itself: not exactly the combo to put you in the mood. If you're breastfeeding, even mother nature is working against you. "Nursing releases oxytocin, a hormone that triggers good feelings toward the baby but also suppresses your libido," says Dr. Booth. "Anthropologically speaking, keeping your sex drive low is your body's way of preventing another pregnancy too soon. Patients are always relieved to find out there's a reason they're not as into sex." I can personally attest to this: I didn't breastfeed my younger two, and the return to a sex life was much more seamless (and painless) than it was with my first, whom I nursed. Some of that was because it wasn't my first rodeo, but I know it also had to do with hormones—and my body being "mine" again much sooner.

3. Things may change a little down there:

When I posed the "what changes about sex after baby?" question to my book club, a mom of three shouted, "His penis shrinks!" (I have a really fun book club.) Yes, depending on your age and how many children you've had, there may be a little more, um, wiggle room. And, says Dr. Booth, "even a woman who had a C-section can be affected, because the hormones of pregnancy widen the pelvic rim." This is also why a woman who loses her baby weight quickly may still not fit back into her jeans for many months. If the thought of doing Kegels literally makes you cringe (I'm cringing now), try Pilates: "All that focus on the core also helps tighten the pelvic floor," she adds.

4. Sex is even more important now:

"If there is no physical intimacy, or if it's really limited, couples start to feel like roommates, which is rarely a good thing. Feeling disconnected can lead to resentment," says Amy Levine, a New York City sex coach and mom. "Start with kissing or touching each other in a loving way, and work your way up when you're ready." Another book club friend confessed that she hadn't had sex with her husband yet and her baby was 6 months old. Not surprisingly, they weren't getting along too well. We all gasped and told her to go home and throw the poor guy a bone. (Did I mention we don't actually read books anymore in my book club?) The fact is, you won't have as much time to linger over dinner or go out for elaborate dates, so sex can be the thing to remind you that you're on the same team—and still more than just Mom and Dad. Also, let's be honest, it puts everyone in a better mood. "I always feel closer to my husband after we have sex," says Taylor. "But I have also found, both personally and from talking to friends, that no matter how evolved a man is, they really are easier to get along with when the sex is regular. And by that I mean they change more diapers and do more dishes!"

5. Quickies are your new best friend:

Knowing that it doesn't have to be a long drawn-out session is a lovely grown-up fact. Full disclosure: Foreplay in my house is usually one of us saying, "Want to have sex?" "Have your partner do what it takes to get you turned on, and then you do what it takes to keep your attention in the moment," says Levine. In other words, don't let your mind drift to what time the baby ate last, or whether you wrote a thank you note to your Aunt Kathy for the sleep sack she sent. "Focus on the feeling—what he's doing to you, what you're doing to him—to stay present," suggests Levine. And think outside the bed, says Marie, a mother of three. "The bathroom, the walk-in closet, even the hallway can work."

6. Afternoons really can be delightful:

"By the time I would get into bed at night, I was too tired to read a page of my book, let alone have sex," recalls Maryanne, a mom of two, of the early days. "I found myself turning my husband down a lot, which never feels good." Then they figured out that weekends during their son's nap was the perfect time to bond. "It took the pressure off our nights and became something we both started to look forward to," she says. "And we still love our naptime ritual!" Taylor, a mom of two young boys, agrees: "Believe it or not, having kids can add an element of playfulness and adolescent mischief to your sex life. My mom came to visit last week, and when she took the boys out for a walk, my husband and I promptly got busy, just like the good old days!"

7. It may actually be better than you think:

I know a lot of women who say they enjoy sex more now than they did before they were parents. That may seem hard to believe, given, well, everything you've just read, but as a mother myself, I know it to be true. One possible explanation: "Giving birth awakens us to a range of sensations, and as a result, our bodies, particularly our genitals, become more alive, increasing our pleasure potential," Levine notes. Childbirth can also shift our internal parts into just the right place, to make them more sensitive to stimulation. "Many women report more comfort with their bodies and more intense orgasms after having kids," she adds.

Just like you will sleep again and you will go out with friends again and even be up for giving birth again, you will want to have sex again. "Give yourself time to literally heal, but also to adjust to your new roles," says Christi, a mom of two who had a tough time resuming a normal sex life after her first. "Be honest and open with each other, and remember that sometimes you may not be in the mood going in, but you will be really glad you did it afterward!" Contrary to what you might think, having more kids does not equal less sex. Similar to how going from zero to one child is the biggest adjustment, returning to sex after the first baby is also the toughest. "I have a 2-year-old and a 4-month-old, and I definitely have more sex now than I did after my first," says Meg. Bottom line: At a certain point you realize life with kids is always going to be chaotic, and you just have to do certain things, like fooling around, wherever and whenever you can.