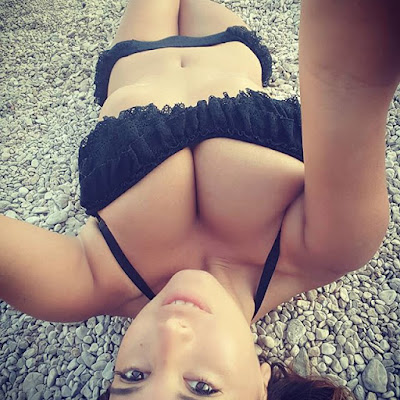 It’s a drag moving house. The first few weekends were spent unpacking and putting things away. Slowly our routine was established. The new house was in a hilly area, and it was easy to see over the fence to our neighbours place. I noticed the lady next door, like me in her 40’s. She had fair skin, red hair, a nice body for her age (in fact nice for any age). Sometimes she sat on her back veranda, dressed in a bikini, reading a book or the newspaper. I also noticed her husband or partner from time to time. For him, the years had not passed quite so well. From his double chin to his beer gut and hairy back, it was a horrible sight indeed.


One Saturday, I was in our front yard, washing the car. The lady next door noticed me and she came over to introduce herself. Her name was Michelle and she had seen me working in the sun. She was wearing a thin wrap, probably over that favourite bikini of hers. She said her friend from across the road was coming over in a few minutes, perhaps I could come over and we could meet. Sure I said, give me a couple of minutes. With that, she turned, swinging that sexy arse of hers.(Porn Stories)

I quickly put the car away, changed my work boots for shoes, but left my t-shirt and shorts. Michelle greeted me at the door and invited me in to the cool of her home.

“Soft drink or fruit juice would be fine.”

She quickly returned with the drinks and sat beside me on the couch. I could smell her gentle perfume, and I noticed her shapely and very white thigh though the gap in the wrap she was wearing. The usual small talk. My job, my wife (Julie), her job. Her husband was Joe, and he was not very good.

“Fine” I gasped. “Julie had been a bit inhibited when we first met, but I was a patient teacher and we now have a pretty good sex life”.

Joe, apparently, was hopeless. Every night a couple of stubbies of beer in front of the TV, falling asl**p. She hasn’t had sex since she didn’t know when. She either plays with herself or with her special friend. Apparently, neither are a substitute for a real mans cock though.

The doorbell rang. Carol had arrived. She was introduced as Michelle’s ‘special friend’ from across the road at number 14. Her husband had walked out on her leaving her with two c***dren a few years ago. Because of the warm weather, Carol was wearing a light summer dress. Framed in the doorway with the light to the rear I could see through the semi-transparent dress and noticed that she had a lovely shapely body. Similar to Michelle but with fuller breasts. Carol sat on the couch, on my other side.

Here I was, surrounded by two gorgeous ladies, who appeared to be lovers. Michelle complained about the hot weather, and removed her wrap, revealing her favourite bikini. She had smooth, almost perfectly white skin, long slender legs, and a nice set of compact breasts nestling within the triangles of the bikini top. Michelle asked Carol if she was hot dressed like that. Carol replied that it was a bit warm. She too stood up and quickly lifted her dress off, revealing a matching set of white lacy underwear. “Michael, how about you?” I agreed that it was warm. I removed my shirt and shorts. Although I don’t work out, I watch what I eat and I keep myself reasonably fit. So while I am slim, it is all in proportion.

Michelle commented “if only Joe looked like that” and with that she leaned over and kissed me full on my mouth. I opened my mouth and immediately her tongue entered, entwining with mine as passion took hold. I held her smooth body, running my hands up to her short, red ponytail. Not to be outdone, Carol moved closer, running her hand up my thigh before straying to my underwear and feeling my erection starting to strain underneath. At the same time, she leaned down and sucked on my nipple while running her hands through my hair. Still sucking, she reached behind herself and removed her bra, revealing her full but still firm tits. Breasts that seemed to defy both age and her two c***dren.

Michelle suggested that there is only so much we can do on a couch. She knew of a better place and we adjourned to the bedroom. The three of us reflected in the mirrored wardrobe doors.

Michelle quickly removed her bikini, revealing a small strip of red pubic hair. Carol removed her lacy underwear, revealing a totally shaved pussy. I struggled to get my underwear over my erection, eventually showing off my shaved 7” penis. We quickly got into it, lips and tongues, pussies and soft female bottoms. Michelle stated absently “it had been too long.” “You too Carol?”

Carol was democratic, “Michelle it’s your house, you go first”. Michelle moved herself so that her pussy was closer to my mouth. At the same time, Carol took me in her mouth, working expertly. I started on Michelle’s pussy, teasing her inner thighs with my tongue, occasionally glancing her pussy lips before moving to the other thigh and back again. She grabbed my head and directed it to where she wanted me. I started to lick her labia and she moaned. I worked my way up to her clitoris, licking it in long but delicate strokes. As she moved and squirmed under me, I began to suck on clit while gently inserting a finger, then two, into her wet pussy. At the same time, Carol kept on working on my manhood. I brought my thumb up to rub Michelle's clit, while continuing to finger her inside. I heard her moan more; I could feel her wetness on my hand and dampening my chin. I continued to work at her, faster and faster as she moved around just so that I was rubbing the right place. She gasped out loud and I felt the contractions as she orgasmed on my fingers inside her. I gently continued to lick at her for a few seconds while she relaxed. I asked if she was ready for the real thing.

I made some space in the middle of the bed and rolled onto my back. Michelle took the hint and knelt astride me, gently guiding me into that warm, wet place of paradise. I told her to go slow, so I can last and give Carol a turn. She started to ride me, her pussy lips wrapped tight around me, sucking on me as she moved up, and then my penis rubbing against those same lips as she moved down. Carol stroked my balls, and then moved to the front to rub her ‘special friends’ pussy. Michelle continued to ride my cock for several minutes, while Carol rubbed the clitoris that I had been working on just a few moments ago.

After a while I suggested that perhaps Carol would like a go. Michelle raised herself higher and higher until I dropped out of her pussy. Carol quickly took Michelle’s place, grabbing my cock, still slick with the juices of her friend, and sliding it inside of her. She fucked much more f***efully, pressing on my chest while she rode me like she was riding a horse. Harder and harder she bounced; it was as if she hadn’t had a man inside her for years. Michelle took Carol’s job, rubbing my balls with one hand and kneading Carol’s breasts with the other. I was holding onto Carol’s arse as she pounded herself up and down my rod. She was desperate for me to come. I could feel my tension start to build under her frantic thrusts. The tingling started inside my balls, and slowly gradually worked its way up the length of my shaft. I gasped out loud as I exploded, pumping huge spurts of cum inside her. I continued to thrust, each thrust ending with another spurt of cum and another wave of pleasure until it seemed I was empty; I had nothing more to give. Carol stayed on top of me, leaned down and kissed me, our tongues intertwining. “Thank you lovely man, you don’t know how long it has been”.

We all disentangled, yours truly out of it for a few moments as that wonderful moment of post-sexual bliss enveloped me. Michelle got our drinks from the other room, her swaying arse looking so much sexier now that it’s naked. I momentarily thought of Joe and his beer and TV. We slaked our thirst while we lay on the bed, our naked bodies reflected in the mirror, slick in parts with each other’s juices.

I asked Michelle if she wanted to take over, I just wanted to watch her going down on her friend. Michelle took over, lying on her stomach, licking and sucking that beautiful shaved pussy. Almost immediately she had Carol squirming and moaning with pleasure. In the meantime, I started to work on Michelle’s pussy from behind. I slipped my hand underneath; Michelle raised her hips a little to give me room. I rub her clit as she sucks on Carol’s. Three of us in a line, two women being brought toward the verge.

I gently pull my hand out, grab Michelle and raise her hips until she is kneeling. I then press forward towards her smooth white arse. She grabs my now hard cock and guides it into her pussy, all the time still licking and sucking at Carol. I start to fuck her slowly, watching Carol eye to eye as she is spread beneath her friends mouth. I look down and see my glistening penis sliding in and out of that soft and wet pussy. I look in the mirror, the three of us in a line, Carol, Michelle's face buried between Carol’s legs and me thrusting from behind. Each of my thrusts f***es Michelle forward a little bit, causing Carol to moan with the changed sensation. After so much fucking and sucking, Carol’s tension must be at boiling point. She moans and squirms. From my birds eye view I can see her eyes closed and her hands on Michelle’s head, holding her down, forcing Michelle to fuck her with her tongue. I continue slowly thrusting into Michelle from behind, slowly, to help my legs from getting too tired too quickly. Slowly to avoid cuming to quickly. Slowly to feel Michelle’s pussy sucking on my rod on each stroke. I reach around Michelle’s waist and find her pussy with my fingers. I find her clitoris, it’s absolutely huge. I start to stroke it with the fingers of one hand while holding onto her hips with my other hand.