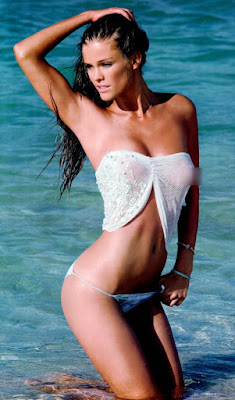 My wife, Vickie, and I have been married for eight years, and over that time, we have hosted some dynamite parties. However, we just moved to Baltimore, and really didn’t know too many people. I joined an amateur softball team through the local community center, and we play at the local park on weekends. Just seeing my teammates for games, I still didn’t know any of them really well after a couple of weeks, so we decided to have a party for the team and their wives or dates.


Well, that Saturday night, I tapped a half-keg and Vickie made gallons of her special wine punch and tons of food. It was a rockin party. So rockin, that even after some guys took their dates home, they came back to join the rest of the team in our attempt at “killing the keg.”

By 2 a.m., we had all slowed down a touch, and the guys were sitting around in a great bullshit session. There were 10 guys and only 2 women left. Vickie and the other wife, Peggy, were in the den having their own talk session. Of course, sex was a big topic and a short time into the conversation, Tom, Peggy’s husband, stated that he and Peggy had an “open” marriage and often “swapped.” He asked me if Vickie and I had ever swapped and I said “no,” right away. However, at that moment, the idea sounded very interesting because Peggy was a little plump but her facial features gorgeous and I love blondes.(Porn Stories)

Tom then told me that every guy there had fucked Peggy, at one time or another, and that Vickie and I should consider the possibilities. What Tom didn’t tell me was that he was a cuckold. Well, my dick WAS thinking about the possibilities—my mind was in Coors-neutral! I was still sober (alright, maybe sober isn’t the word—un-d***k) enough to know that I didn’t like the idea of Vickie and another guy, but I also didn’t like the idea that every guy there but me had had his shot with Peggy. It just wasn’t fair, and, -- damn it! -- she WAS hot looking! As I settled down a little and began picking up the conversation, again, I realized that the guys were banging on Tom to set something up with Peggy—right then and there— at our party!

Tom swaggered and swayed into the other room, and returned with Peggy. She had this silly grin on her face and her eyes were sparkling. Tom put a few cushions on the floor and then, like some kind of crazy clothes storm, everybody was getting naked in a hurry. I couldn’t believe it! And I could see Vickie standing in the doorway, not believing it, either. In a flash, Peggy was naked and on her back and one guy was shoving his hard cock into her. The other guys were all nude, hard, and waiting their turn. Even with Vickie in the same room with me, I could feel my cock straining to rip out of my pants. After the first guy finished, Tom said something about being polite to the host and giving him his turn. I started to say no—I really did! I looked at Vickie—and then I looked down on Peggy’s naked body. She was pinching her nipples on her petite breasts, licking her lips and holding her legs open for me. There was a drop of the first guy’s cum dripping out of her pink pussy.

I shrugged and smiled like an idiot. As I unbuckled my belt I saw Vickie disappear from the room, and I thought, “Sure, she’s pissed now, but she’ll get over it!” Nothing was going to hold me back from fucking this fantastic blonde waiting for me! I buried my cock into Peggy’s pussy on my first shove. She was wet and loose and I slid right in to my balls. But I was too excited. In about four hard humps I was blowing my wad in her cunt and Peggy was smiling up at her audience, and said to me that’s enough cuckyboy, go join Tom in the corner! I had never heard the term and I looked over and saw Tom jacking off in the corner. I had to look twice as he had the smallest penis I had ever seen. I wasn’t by any imagination huge but Tom was dinky. Peggy said, “Who’s next?!” I couldn’t believe that she was being such a slut. I looked up and saw the biggest black cock I had ever seen in my life. It was James our center fielder. I had always heard stories about black guys but this was ridiculous. He entered Peggy after I slid off and I had never heard a woman scream for sex as James pounded away at her well fucked pussy. My head was spinning from the scene and I sat down on the couch. I was sitting watching James plow into Peggy when I heard Vickie over my shoulder, “Hey, guys, I don’t want you to wear yourselves out with Peggy! There are two pussies here that need attention. Lot’s of attention!”

I turned around to ask Vickie what she thought she was doing, but just then, she hit the stereo and began dancing. She danced over to me and said, “Not one word out of you, you bastard, your going to get yours! Turn about is fair play and this is my party, too. Just sit back and watch me enjoy this.” My heart was pounding with fear as I had never seen her like this, I wasn’t sure if she was pissed or serious about fucking these guys. I knew I was in trouble and I had better not protest or I would be in the dog house for a long time.Vickie danced to the center of the room and I thought my wife had never looked lovelier, sexier, hotter than at that moment. Before long, she lifted her sweater over her head to reveal her braless, great 36D chest to the guys. Everybody clapped and cheered and Vickie quickly dropped her skirt and was naked, gracing the guys with a look at her naked body. She danced till the song ended and then stood there. Her eyes were glowing with excitement (or maybe it was revenge) and asked, “So, boys, who wants to fuck my pussy first?” The guys went nuts!

Both women were immediately getting all the cock they could handle. It was obvious Vickie was on a mission to suck and fuck every cock in the room except mine. At one time, Peggy had a lull in the action and asked me if I wanted to clean her up. I thought it was an odd request but I nodded and went down on her well used cunt. Peggy’s pussy was so loose and sloppy-wet it tasted funny but Peggy was getting off on my licking her. I couldn’t keep my eyes off Vickie though. Peggy finished with my mouth and I went back to my seat just watching Vickie get her brains fucked out. She was fucking and sucking one guy after another with obvious enthusiasm and glee. People started crashing around the room. Peggy fell asl**p but Vickie was wide awake and ready to go. I watched Tom straddle Vickie, reach back into her pussy for some lubrication and then fuck her tits. I had only seen that done in videos, before, but I guess because Peggy’s tits were so small, he enjoyed big tits when he found them. He shot most of his load on Vickie’s face and Vickie looked at me as she wiped Tom’s cum with her finger and then sucked that finger clean.

As I slid my aching cock into her well-fucked pussy, she wrapped her arms and legs around me and smiled. “See? You get what you deserve. You know what they say about paybacks. You should have never even thought about fucking Peggy.” “I know.”
“Besides, I’m prettier.”
“I know. Way prettier.”
“And I have a better body.”
“Much better, and a much tighter cunt,” I agreed.
“How could you fuck Peggy?”
“How could you fuck all these guys?”
Vickie actually purred a little and said, “It was easy and a
whole lot more fun than I thought it would be. At first, I just
wanted to piss you off, but then I began to really like all the
attention.”

“I could tell that, Vickie.” “I’ve just never been this naughty before in my life, and I guess I really got off on it. And, I even kept count. You’re my tenth different cock of the night, and this is the fifteenth time I’ve been fucked. I also had 5 guys cum in my mouth and one on my tits.” I exploded into her well-used cunt with the absolute best orgasm I had ever had in my life. I kissed her well-used mouth and licked her well-felt tits. I loved her more than ever. Before we went to bed, I looked around the room. “How are we ever going to face these people, again? What happens at the next game when we show up? What do we say?” Vickie smiled and said, “Next game? I’m wondering what these guys will want for breakfast!!!! Think it’ll be a repeat with
anyone you know?””

And she was right. I awoke at 8 a.m., to the sound of James hard cock slurping in and out of Vickie’s wet cunt. He was fucking my wife in my bed, not two feet from me, and my wife was loving it! She was making sounds I had never heard in all the time we had been married. As the guys woke up, it became a repeat performance, with Vickie fucking several of the guys again before they left. She was insatiable. Tom and Peggy left first after Peggy had her holes filled again. Tom just seemed so happy watching his wife and it made it easier for me.

We’ve had two more parties like that, since that first one. I watch Vickie fucking until I get tired watching, but she’s still fucking. She seems to be enjoying her new role as team slut and “general easy piece,” and, although I never imagined Vickie behaving like this, and me accepting it enjoying her adulteress ways. Vickie called me from work one night and told me she was going to dinner, dancing, “and whatever” with three salesmen who were in town for the night. She came home the next morning, covered with love bites and scratches, with just enough time to shower and change for work.

Another time, I was mowing the front lawn when Vickie pulled into the driveway with a police car right behind her. The two cops followed her into the house and the three of them didn’t reappear for an hour. Later, Vickie told me that they had pulled her over for speeding just as their shift was ending, and she suggested “an alternative” to getting a ticket. Both cops have been back to the house several times, since; once, with two more friends along for the fun.