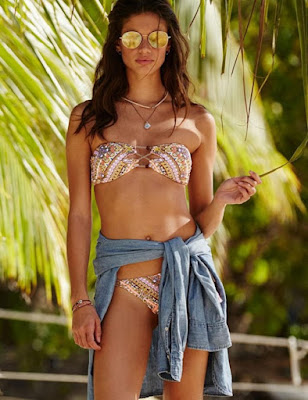 The bar was packed out, well it was Saturday night. My wife Polly, a stunning petite redhead of 18 summers, and I pushed our way through the crowd. We had popped in for a drink before going to see a show. As we where passing a booth full of construction workers a guy tapped my arm and said. "If you need a seat you can squeeze in here." He stood up to let us in. I said to Polly, as she sat down, "I'll get the drinks." and went off to the bar.


It must have taken me at least 15 minutes to get the drinks and when I returned to the booth I expected Polly to be sitting on the end, or at least one seat in but she was sitting in the middle of the booth. She had 3 guys either side of her. She looked very flushed and she was just fastening a button on the front of her blouse. I was distracted by the guy who had first stopped us. He tapped my arm again and pointing to a stool said "We found you a seat." I sat down directly opposite Polly and as I passed her a drink I asked her if she was OK. She nodded yes and gave me a big smile. The lights dimmed and a group started to play on a small stage. I had to turn sideways on to Polly to be able to watch. They where quite good and the lead singer was a very sexy looking girl in a mini dress with a very low top. She was showing a lot of cleavage and a lot of leg, so my eyes where riveted to the stage.(Porn Stories)

I'd subconsciously noticed that the guys at our table where coming and going. I really didn't think much of it, just supposed they were going to the toilet or to the bar for drinks. It was only when I turned to look if Polly was OK that I noticed that the seating arrangement was changed. I began taking notice of the coming and goings and glanced around from time to time. It seemed that they where taking turns sitting next to Polly. Then one particular song came to a sudden end, it took the audience by surprise and there was a momentary hush before the applause started. It was during that hush, in that split second quietness, that I heard Polly's moans. Moans that I am used to hearing in the privacy of our bedroom. I swung around to look at Polly, in the near darkness of our booth, I could make out that her blouse was open, the guy on her right was sucking her tit. The guy on her left had her knee pulled up and to one side so that her legs where wide open and he was obviously finger fucking her and what was even more incredible was the fact that she was enjoying it and... I had a terrific hard-on.

I could see that she was 'coming', and from the expression on her face, it must have been a wonderful climax for her. I was stunned, confused, mixed up. I didn't know what to do. Didn't know what I was supposed to do. A gang of strangers where abusing my wife. Should I stop them. But she was enjoying it. God, I was enjoying it.

As she came down from her climax, she saw me watching her and in panic and embarrassment, she pulled her blouse closed and pushed at the men until they got up and let her out and she rushed off to the toilets. I ran after her and caught up with her in the passageway to the toilets. I grabbed her and held her to me. She sobbed into my chest and spoke very quietly. I had to ask her to repeat it. "I'm sorry." she said. ""Don't be. There's no need to be sorry. I was enjoying it too." "You were?" she asked incredulously. "Well I didn't know anything was going on for ages, I only noticed about 2 minutes before you climaxed. Admittedly I was shocked at first..... But then I had the most wonderful sexual feeling coursing through my body as I watched you being manhandled by those workmen." "And you didn't mind?" she asked. "I loved it. I was disappointed when you stopped."

"Oh Harry. I do love you.... but I just felt suddenly wicked. As I got into the booth and sat down, the men where saying "Come on sweet thing, sit in the middle." Well I couldn't stand up because of the table, so one guy picked me up onto his knee and slid me onto the next guys knee and they passed me along like that but as I sat on each lap, that guy would feel my breasts or bottom or stick a hand up my skirt and finger my pussy. It was a terrific turn on. I was passed right to the far end and back again then back to the middle. By the time I got there, my bra and panties where missing." "I wish that I had seen that, I'd have come in my pants."

She laughed at that and was obviously feeling better. "We had better leave or we'll miss the show." I said. She seemed very disappointed at that. "Don't you want to see the show? " I asked. "Would you think I was awful if I stayed here and you go on your own," she said coyly, looking up at me like a helpless little girl. "Will you be all right her on your own?" I asked. "Oh yes Darling I will." "Will you behave like a slut, if I leave you here?" I said as my cock was threatening to burst out of my trousers. "I'll behave like a depraved fuckslut." That did it, the spunk shot down my leg, leaving me in a sticky mess. I had never heard Polly swear never mind say anything like that before.

I went to the Gents and cleaned myself up and then returned to the bar. The lights where still dim but I could make out in the gloom that Polly was kissing one of the guys. So not wanting to spoil her fun, I left and walked down to the theatre and hung around debating whether or not to go in. My mind was still racing with images of Polly being used by the gang of men and I just had to go back to the bar for another look. I had been gone for about an hour. As I entered I couldn't see Polly in the booth. All the guys were there but where my wife had been sitting there was an empty place. Just then I noticed her head bobbing up and down. She was laying on her side on the seat and sucking one guys cock as another guy was fucking her from behind. I climaxed again in my pants, the sight of my lovely wife being fucked was just too much for me to take.

I once again cleaned myself up in the Gents and when I returned to the bar, the lights where back on and the booth where Polly had been, was empty except for 2 of the guys. I went over to them and asked where Polly was. 'Well man, that is one cock hungry little slut. We'd all fucked her and she still wanted more. So the other guys have taken her to a black club down the block, she'll get well fucked down there. Hope you don't mind her getting some black cock?" They both fell about laughing at that. "Wha..... what?" was all I could say, as what they had just told me was taking it's time to sink in to my befuddled brain. "Oh yeah, she left you a message. Don't wait up for her, she'll be home tomorrow."

I was awakened the next morning by Polly sitting on my face, letting the spunk of who knows how many men, pour over my face and into my mouth. But the biggest shock was that her beautiful red bush of cunt hair was gone, I was sucking on her plump bald pussy lips. She told me later that the men held her down on the bar whilst everyone in the club watched her f***efully having her cunt shaved. She said that it was such an erotic experience that she climaxed 5 times whilst they where doing it. That is how it started and how it continues. I wait at home for Polly to return from gang bang parties just to be there to clean her well used cunt. Her precious cunt that should only belong to me, is used by dozens of strange men every night. She allows me to keep it clean for her by sucking every last drop of spunk out of it.

Was there ever a couple so happy as we are?