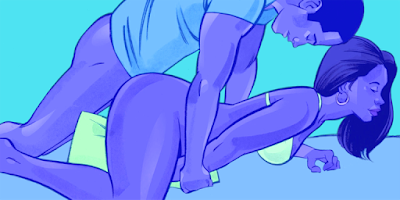 1. It’s the least awkward position for him. Think about it: Lots of other positions lead to complicated questions of what to do with your legs and arms. Missionary requires him to prop himself up. If you’re in a position that puts you on the side, his arm can fall asleep. But doggy style is straightforward. He gets on his knees, holds on to your hips, and goes at it. It’s simple. It’s beautiful.

2. It’s a powerful position. He’s got a lot of control here, and he’s likely into that (unless, of course, he prefers to be dominated). If it’s something you’re comfortable with, letting him set the pace can be enough to finish things off. That’s good to know if Grey's Anatomy is on and you need to end things quick.


3. You won’t see him wipe snot off his nose in this position. Or when he stops to itch his ear. Or how dumb his orgasm face looks. Let’s be real: Sex between two human beings isn’t always perfect. Sometimes things like this happen. But at least in doggy style, he can sneak in a quick breath check or make sure he doesn’t have deodorant stains without you noticing. (sex advice)

4. He gets a really good look at your ass. All right, this might not be that surprising. But consider just how few positions give him a good look at your butt. You can count them on one hand. So while it isn’t surprising that he’s going to love doggy style if he’s an ass guy, appreciate just how little he gets to see your ass during sex. Unless you’re all about doggy style and reverse cowgirl. In which case, that man is spoiled.

5. It’s great for all shapes and sizes. It doesn’t take a lot to get doggy style done. It doesn’t matter if one partner is bigger than the other, or taller or shorter, or if one of you is tired. It’s a very easily accessible sex position.

6. It’s easily modified. Too tired for crazy, passionate sex? Lie down on your stomach. Back problems? Throw a pillow under there. Have him do it crouching. The possibilities are endless. OK, they aren’t endless, but there’re definitely more than three possibilities, and men consider that a little victory.

7. He can take a break. The position allows him to get in there pretty deep. Which means he can also go pretty slowly and still have a ton of stimulation that you're hopefully enjoying too. This is a tiny, sweaty blessing if he needs a breather.

8. It allows for pretty easy cleanup. Other sex positions can get fluid all over him and you, and require a lot of cleaning and tissues. But with doggy style, he can just pull out, and both of you can sprint to the bathroom. Since your junk is mostly in the air for this position, that means less of a chance you’ll have to clean your whole bedspread.

9. It’s likely your favorite too. Doggy style is always among the top sex positions regardless of age or gender. Which means there’s at least a pretty good chance you’ll both agree on this position. And when you're both 100 percent in it, it's literally a million times better. Seriously, I have the stats to back that up.