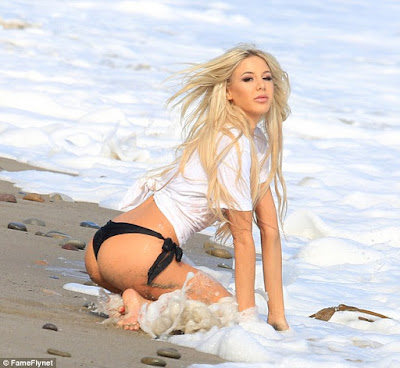 My wife told me she had something she needed to talk to me about. We each got a cold drink and headed out to set by the pool. I sat down and she moved a chair so she was facing me when she sat down. She was wearing a short sun dress so when she crossed her legs I was treated to a perfect view of her leg that included part of her hip. Right away she caught me looking at that beautifuly tanned leg. She smiled and pulled the hem up so I could tell she didnt have any panties on. Now that I have your attention she said I've been invited to a bareback party. Is that what it sounds like I asked? Yes she said. Well how do you feel about it I asked her. She squeezed her thighs together and said she was excited.

Well on the day of the shoot I left for work but I knew my mind wouldn't be on my job. I'd be thinking of how my little wife was going to be used by all those hard cocks. The day seemed to drag on and at just after three I told my guys I was leaving early.

At home I mixed a strong drink and tried to calm my nerves down. It was right at seven when I heard the garage door opener raise the door on her side of the garage. I stood up and met her at the kitchen door. She looked tired and her hair was slightly messed up. She was wearing a denim mini skirt that came to mid thigh and a black tank top. Her thirty four B cup tits bounced just enough to show me she was braless. I kissed her and asked if she had a good time. She said yes I had a great time. Tell me all about it I almost begged. She said I'm going to soak in a hot tub, you can set in there and I'll tell you about what happened.

I the restroom I ran her a nice hot bubble bath. When she dropped the mini skirt I could see traces of suck marks all around her smooth shaved vagina. I reached out to touch it but she stopped me. No don't touch me she said. As she sat down in the hot soapy bath a aahhh excaped her mouth. She closed her eyes and laid back. I gave her a few minutes before I started asking questions.

How many actually had sex with you I asked. She said all seven. I asked if they double penetrated her. Yes she said. Did they have big cocks I asked with a slight quiver in my voice. With her eyes still closed she begain to smile. Oh yes they each where extremely well hung. How does your pussy feel I asked? She said I can feel my heart beating in both my asshole and pussy. Did you swallow I asked. Yes she said. So you got cum in your ass , pussy, and mouth I said. Yes she said. Well baby you relax and I'll go get you something to wear. She said nothing tight.

She stayed in the tub for a half hour. When I heard her get out I went in to help dry her. I handed her a night shirt that came to just above her pussy leaving it totally uncovered. She slipped on her slippers and she and I went into the den to talk.

She said they dressed her in a black garter belt , black stockings, and black six inch stiletto heals. She had two fluffers sucking the guys to help keep them hard. They each fucked her pussy and then her ass, and finally she was setting on the thickest cock and they took turns fucking her ass. She kept a cock in her mouth. She said I have tasted my own pussy on a guys cock before, but this is the first time she tasted her own ass . She said I was a complete slut. Would you ever do it again I asked? Yes I would she said.

The next day I took off work to stay home with her. I waited on her hand and foot. Later that evening she had me bring her a pair of panties. I tried to get her to wear a thong but ended up bringing her a white pair of boy short panties. At about eight that evening someone pulled into our driveway. I opened the door and there was a tall thin back guy walking up to our front door. He introduced himself as Jackson. He asked if my wife was home. I invited him in. My wife stood up when he walked in. He said hey baby I just came by to check on you. He said I've never seen a white girl take that much black cock at once. She blushed and said well thank you. He turned to look at me, then he said you have a extremely talented lady here. She took the biggest cocks in our group without a single complaint. He turned back to my wife and said we have another group set up for next Tuesday if you are interested. She said my pussy should be OK by then. I spoke up, so you are going to do it? She said yes, tell them I'll be there.

After Jackson had left she told me that she couldn't stop fucking those thick cocks. And over time I've completely stopped having sex with her.