"Sex tips" Have Crazy Sex In The Shower 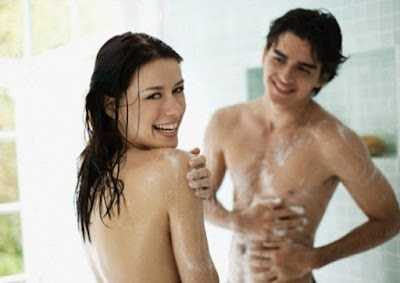 Of all the things your girlfriend wears — or um, doesn’t wear — her sexiest look is the one that’s the most natural and raw: straight out of the shower, with wet hair and a towel or robe (at most). When you think of the shower, it’s easy to see why it’s an ideal steamy place to get it on: the humidity, the pressure of the water flowing down, the ability to get super hot or surprise with cold, and of course, two naked, wet bodies doesn’t sound bad either.

But the reality of having shower sex is that it can be a little awkward, and yeah, at times, a little difficult to get right. Between the danger of slipping in the shower — which won’t turn anyone on and could actually cause you both to go rushing to the ER — and the tight quarters that mean you’ll need to get creative with your position and movement, shower sex can be hot — but only if done in a way that makes you both comfortable. (sex advice)

Here, sex experts give the best tips for turning those suds on your body into crazy, hot shower sex:

Though most will say keeping shower sex pretty short — under 20 minutes — is ideal so you can head on to the bedroom to continue the play, if you want to bring an extra element of seduction to the shower, take the time to set up the scene. “Depending on the layout of your bathroom and shower, try dressing up the room a bit with candles and maybe some incense to set the mood and add some romantic aroma. This adds additional visual and olfactory stimulation which enhances the entire experience,” Singer advises. “In addition to candles and incense, try bringing in some sort of music player into the bathroom and put on some romantic or sexy music that you both enjoy.”

Between the steam and the candle light, when she walks into the bathroom, she’ll instantly know what you have in mind and she’ll feel more comfortable with romantic, intimate scene.

For most men, a big part of what gets them really in the mood — regardless if it’s in the shower or not — is seeing their partner naked. The act of undressing itself can be a stimulating one, and when you throw in hot water and soap and her wet hair, it takes it to a whole new level. Sexual expert and psychologist, Dr. Rachel Needle says to invite her to get in the shower first — while you watch. “Often times you don't fully get to gaze and appreciate how sexy your partners naked body is. The shower is a great time to fully take in how hot your partner is and to give them a chance to gaze at your naked body. You can build the anticipation by having her get in the shower first while you sit on the counter or toilet watching her,” she explains. “Seeing her standing under the warm water, lathering her body in soapy suds while she lets the water run down her body will get your engines going. At this point you can join her in the shower to warm her up.”

3. Get Soapy With Foreplay:

Great foreplay will always lead to great sex, and gettin’ it on in the shower is no exception. In fact, it can be a time when you actually delay getting everything started so you can enjoy all the new sensations of your two naked, wet bodies together.

Take time to wash each others bodies, making sure to get soapy and slick. As you clean your partner you will get to explore their whole body, touching places that may be hard to reach in the bedroom,” sexual expert and psychologist, Dr. Melissa Fogel says. “This is also a great opportunity for some hot foreplay. Enjoy the feeling of her soapy breasts against your body as you lather her up, working your way down her body caressing her upper thighs.

Finding the best position for a stand-up shower or tub is a toughie (we’ll get to that later) — but before you think about intercourse, experts urge couples to really get in the oral sex as much as you can. Why? It’s guaranteed that you’re both clean! “The shower is a great place to take advantage of the fact that you both are fresh and clean by adding some oral action. Take turns dropping to your knees to orally stimulate your partner,” Needle suggests. “One position to do this is to use one hand to hold onto the shower rod while placing the other hand on the wall for balance while standing on the edge of the tub. Using this technique allows the person giving to be able to bend down without having to get on their knees and also allows full access to the lower part of your partner’s body.”

Shower sex can also be a place for your girlfriend to give oral sex if it’s usually not her thing, according to certified sexual expert and psychologist, Dawn Michael PhD ACS CSC. “The water is warm, wet and the perfect time to kneel down and give him oral sex. It can make women whom otherwise may find oral sex to be messy or too dry, both of these are taken care of in the shower,” she explains. “Also, when the penis is wet, it is more slippery and easier to suck on. When he does orgasm because the water is warm it can be outside of the mouth or under the tongue and let it come out of the mouth, so no clean up!”

If you want to get the most out of the short time you’re in the sex, channel your inner athlete because you’ll mostly be standing up. Singer suggests starting by facing each other, with your girl leaning against the shower while you hold up one or both of your legs (make sure to get your footing right before you grab her so you don’t fall!). “This is highly intimate, brings in the factor of eye contact and also the element of trust — since you’re holding her up,” she explains.

Though it might seem like water would make your girl wetter, Fogel says that it can have the opposite effect and dry her out. “Lube is a great sensation, especially when combined with the sensations of warm water. Be sure to use a silicon based lube which is waterproof and won’t wash away,” she says. “A word of caution when using lube: make sure not to spill any; lube is very slippery and you don't want to end up with a sex injury!”