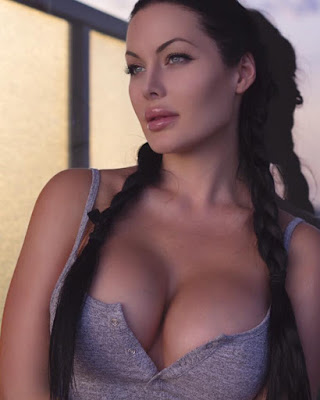 
One night we went out to eat and had a few drinks. Afterwards, we went to a bar to dance and drink some more. While there, we met some people that we began talking to and taking shots with. Once the bar was nearing closing time, they asked if we wanted to go back to one of their houses to hang out longer and drink more. My husband and I got the address and called a cab.

Once we arrived, it was obvious the guy who owned the house made a lot of money because the house was huge. The owner, Ben, arrived about the same time and led us into his house. He made some drinks and put on some music. We sat around drinking and chatting thinking the others would arrive soon. About an hour passed and the other people never showed up so it was just us three. Ben asked if I liked dancing and if I would like to dance. I told him yes so we began dancing. Several songs passed and we were having so much fun that I had forgotten about my husband. We decided to take a break to get another drink and realized my husband had passed out on the couch.

I commented that my husband always passed out when he gets too d***k and it's nearly impossible to wake him up. Ben laughed and said it was ok then went to cover him up with a blanket. Ben said we could just stay there for the night so I said thanks it was greatly appreciated.

Ben and I began talking more about what we did for a living among other things. He showed me around the house and we ended up sitting in his room talking on an oversized chair. I hadn't realized that while we were talking my short sundress had rode up to the point that most of my ass was showing and my thong was in clear sight. Ben commented that I had beautiful legs and an ass to die for. I laughed, blushed, and told him thanks. I commented that he had a very nice body himself.

Ben turned on some music while we talked some more. The conversation started turning more sexual and he said that I danced decent for a white girl. I thanked him for the compliment. He got up and went to change into some more comfortable clothes. When he came out of the bathroom, I noticed that his cock was showing through his basketball shorts. It wasn't hard but seemed way thicker than my husbands.

He must have noticed me looking at it because he asked if I liked what I saw. I commented that it looked big and I hadn't ever seen a black man naked in real life. He laughed and asked if I wanted to see him naked. I said it would be nice but he couldn't tell my husband. He smirked and said ok. He pulled off his shirt first and I was amazed at how muscular he was. I didn't realize how he was until that point. He was probably about 6'2 with no body fat and very well defined muscles. I said wow, you look hot. He thanked me and took off his pants.

All I could do was just stare at it with my jawed dropped in awe. It wasn't the longest one I've ever seen (as compared to porn) but was probably about 9" and as thick as a beer can. It was still soft and I said I couldn't imagine how big it could get when hard because he was already way bigger than my husband. He walked over and sat down next to me. He asked if I wanted to touch it and said I shouldn't but really wanted to. He said then go ahead and not be scared. I put my hand around it and began stroking it slowly. I couldn't really get my small hand all the way around it because of how thick it was.

All of a sudden my husband walked in and asked what we were doing. I said look at how huge his cock is and asked if he ever saw one that big. I kind of thought he would be mad but he just said no he hadn't seen one like that. He asked if I liked it and I said I really did. He said then don't let me interrupt and walked to sit across the room in another chair.

I looked at Ben with my hand still stroking his huge cock and smiled. I could feel how horny and wet it was so I was sure he could see the lust in my eyes. I bent over to give his cock a kiss. When I did this I moved down on the floor onto my knees so I could have a better angle at sucking his dick. I began kissing, licking, and sucking his thick shaft and made sure to suck his balls that were at least the size of eggs. As I worshipped his cock, he asked if I liked his big black dick. I looked up at him with his cock still in my mouth and nodded yes. He said good because he hasn't had sex or played with himself in weeks so he was really needing the release.

He stood up, picked me up, and carried over to his bed. He layed me on my back and took off my clothes. I spread my legs so he could have a good look at my clean shaved pussy. He commented on how small and pink it looked. He kissed up my legs and started licking my pussy. It was a few minutes into it when I had an explosive orgasm. I was shocked because it takes my husband forever to get me off from licking me but Ben was so good at it. I've never had an orgasm so big from getting picked.

He asked if I was ready to feel a real mans cock inside me and I shook my head yes. I told him he needed to get a condom. He said he didn't have any so I looked at my husband to see what he thought. He just shrugged his shoulders and kept playing with his little cock. Ben asked again if I wanted his cock or not. I nodded my head yes and he said I had to tell him what I wanted.

I said "I want you to fuck me with your big dick." He smiled and began working his cock head against my pussy, hitting my clit and trying to work his cock into me. It felt so amazing to have such a big man, not just size of his dick but his overall body, making me feel so horny. He pushed the head into me which hurt like hell but also felt so good. I had never felt anything like that before. He worked the head back and forth in small motions gaining just a little more depth with each small push.

He said "damn girl you're pussy is the tightest I've ever felt. I'm gonna enjoy breaking it in but you won't ever be satisfied with your husbands dick again." I felt a huge rush of lust shoot through my body. I said "you feel so good. Put more in. I want to feel you. I want you to stretch me out." He pushed more in which stretched me so much. He felt deeper than I've felt before. I thought he was all in but I looked down and saw half of his dick not in me. I said "oh my god you feel so fucking good. I love your cock. Please give it to me. I want your whole cock inside me." He rocked in and out not really going much deeper. I began having a bigger orgasm than I did from his pussy licking. He smiled and said "that's it, cum on my dick." I came all over his dick. I had never had such an orgasm in my life.

He rolled me over into doggy position and entered me from behind. As he did, he commented on my tight looking ass. I looked back at him and said "now I want your whole dick in me. Please let me feel it." He asked who's pussy this was now and I said "it's yours. You can have me anytime you want me, just please let me feel you completely inside me." With that, he pushed his dick as deep as he could get it. This sent waves of pleasure like I've never felt. I instantly had another orgasm and he just held it there. I thought he was all the way in but he still had another inch to go. He started pulling out and pushing back in with more power each time. He did this for a bit then pushed hard and I felt him crash against my cervix again.

We fucked several more times that night and he came in me each time. He was the only man to make me feel that way. My husband and I talked about it the next day and decided it was ok for me to keep fucking Ben. Unfortunately, the following week Ben called and said he was being transferred across the country. We weren't able to meet again and to this day I still think about the best fuck I've ever had. I didn't get pregnant which shocked me considering how much he came in me.