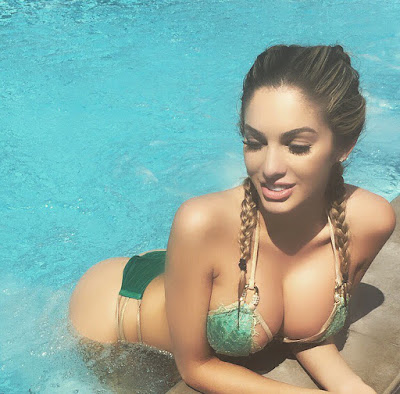 
After a few days, she told me she found a guy she though was hot and he was willing to try a threesome. She send me pictures of the him to see if I was okay with it, and I just said yes. We scheduled something right after my flight was arriving. I was able to host, since I had an hotel room with two rooms. We the time came, I gave the address and my room number, and was a bit stressed out since it was the first time I was doing something like that. I had already regrets when I sent it, but I could not back off unless I quit the room.

So the guy said that we should probably start to undress, which he did when I answered a shy "Yes". I started doing the same after, and soon we were both in underwear, and then fully naked. He had a nice smooth body, quite muscular. His pecs and abs were well defined. I did not really look at his cock at first, and went on one on the 2 queen beds where my computer was. I sat on one side of the bed and he joined me taking the other side.

The video was already loaded and I started it. He started to stroke slowly right away, and I followed. I was a bit stressed about the situation and my cock was still soft. I started to play with it and It did not get hard as usual. I was semi hard for a while, even if the video was stimulating. The other guy's cock was probably hard since a while at this point. I was not looking too much to it, not to give any indication or hint that it would turn me on or so. I guess he was looking at mine, since he asked me if I had issues my cock. I said that I was a bit stressed about the situation. He said I should not be and asked me if I ever did something like that. He told me he jerked a few times in college with roommates and friends, so he was used to it. I kept massaging my cock and balls and it was slowly rising and getting harder. While we were working on it, our legs would spread out sometimes and our thighs were touching once in a while. At some point, to get a better position, they were touching permanently, side by side. I did not realize if that was because he had moved towards me or our legs were more spread out, but I could feel the heat beside me. He was using his left hand to stroke, and his right one was sitting on his thigh, so sometimes I would feel it on mine as well, thinking it was just by accident. But at some point, I could feel his hand going up and down slowly on it. It kind of turned me on a bit at this point, so I just let it go, until he got closer to my inner thigh, and then on my cock!

That was the ignition point. I was already finally hard and exited at this point, and that's when I get naughty. He started massaging my cock slowly for a few seconds, while I was closing my eyes and enjoying. He kept going, but then I got on my knees and rotated my body so I could face him. I quickly went closer to his body and started eating his pecs and nipples while looking at him. I had secretly been turned on with nice pecs and wanted to lick his hard tips. It actually surprised him, but he smiled and answered yes when I asked if he liked it. He made a sign with his fingers and said to come closer. I went forward and he kissed my mouth a few times.

I was a bit sorry to have cum so quickly, but it felt so great at the same time. My hands were full of, so I just went away in the bathroom to clean myself. I also started the shower to clean myself more. I had large ceramic shower, so he also came to the bathroom and asked if he could take a shower as well. He did not really waited for approval and joined in, he took the soap and started massaging his body in cock in front of me in a naughty way. He did not ask but took my hand and placed it on his cock which I had finally the chance to contemplate directly. His cock was massive, very smooth and completely shaven. He threw some water over it to remove the soap and pushed my head towards it. I guess I was in depth, so I let his cock fill my mouth in and out and started blowing him. I did not took long, after a few gags and taking a few breath since I was not experienced, he finally came.

The next hour, the next day, I felt awkward about what had happened. I had a first time experience, but not the one I though I would have.