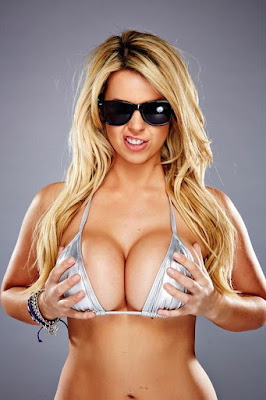 Rebecca Holdsworth struggled into her tight-fitting nurse's uniform, wriggling her body to fit the dark blue material across her ample bust. She had always been a big girl up top and the standard-issue uniforms strained against the thrust of her 42GG chest. If she got a uniform that left room for her big assets, it would billow out over her hips like a tent; she may be voluptuous up top but her hips and bottom were nicely rounded and curvy, thank you very much. She sighed as she managed to fasten the uppermost stud then admired herself in the mirror. Not bad for a woman of forty-three, even if she said so herself. All the doctors and patients certainly thought so anyway; she caught their admiring glances when she was on her rounds but she always refused any advances. Since her husband's death, she couldn't bring herself to get involved with another man. So for the last six years, she had been celibate. "Shame," she told herself as she pivoted and watched her reflection in the mirror. "All this going to waste."


Tonight was going to be a strange shift because her own son, Paul, was a patient on her ward. He had come off his motorbike - the bike she had advised him not to buy for his 19th birthday- and broken a leg. He was in hospital until tomorrow morning, so tonight he would be one of her patients on the night shift, At least she could keep an eye on him.

She fished her car keys out of her purse then left the house.

Paul Holdsworth had his own room at the hospital, one of the perks of being a nurse's son he guessed, but liked to wander around the ward in the daytime and speak to the other patients. He was just returning to his own room when he caught the eye of Joe, an old man in for a broken hip. Joe winked at Paul and smiled. "She's on tonight, Paul."

Joe leaned forward and whispered,"The nurse with the huge rack. Christ, I've never seen 'em so big. She's pretty too...long dark hair and a cute face. You wait till you see her."

Paul guessed Joe meant his mother as soon as he heard the words "huge rack." It was true; Paul had never seen a woman with a bust as big as his mom's. He was a tit man and loved to see a well-endowed girl but the fact was, no girl was as big as his mom, so they never measured up, so to speak. He knew it was unfair to compare them with his mom, but he couldn't help it.

Joe nodded at him. "You'll know her when you see her, lad."

Becky got to the ward and went through the hand-over procedure with the other nurses before she could do her rounds and go to see Paul. She noticed Joe Wiley watching her as she filled in the necessary paperwork and wondered if she would ever date again. She felt that the moment she started seeing other men, she would be betraying her husband. Yet she had urges like any other woman and longed for a sexual relationship; at the moment she found relief by rubbing her clit furiously and fingering herself when she got home from work. She enjoyed it but found it lonely; there was nothing like touching a man, feeling his hands on her body. She shook her head. This was no time to get oversexed.

She decided to go and see Paul.

His room was at the far end of the corridor and by the time she got there, she had cooled down a little. She knocked on his door but got no answer so she gently opened it, thinking he might be asleep.

He was asleep with the TV on but his bed was unmade so Becky crept over to straighten out the covers. Paul lay on his back, wearing only his pajama bottoms, and Becky thought how fine her son had turned out. At 19, he worked out at the gym and was toned and lean where some boys his age were already going to seed. He would make someone very happy one day. She started to reach for the blankets then stopped, feeling guilty even as she did it.

Her son had an erection. It tented the front of his pajamas and by the looks of it, it was big. Becky tried to ignore it and reached for the covers again but again she hesitated.

She didn't want to cover up something so beautiful. She bit her lower lip. What the hell was she thinking? She had gone much too long without a man if she was getting turned on by her own son's erection.

Still, if she left it uncovered, she could come by his room every now and then and just...look at it. She felt a tingle in her lower stomach at the thought. Paul's erection was just inches from he hands...what if she brushed it accidentally. She lightly brushed her hand over the pajama tent and took a sharp breath as she felt him through the material. Oh God, what was she doing? It felt so good. For six years she had had no one and now in front of her was a rampant, aroused dick. How could she ignore it? She only wanted to see it. She reached for his pajama buttons.

But she couldn't stop. Her pussy felt wet and excited and that excitement had spread over her whole being until all that mattered was seeing Paul's cock. The buttons came undone and her son's thick manhood lazily and heavily lifted up from the open pajamas.

It stood erect before her, the foreskin pulled back slightly so that the tip of the purple glans stared at her with its one eye. His dick was thick, the head big and solid looking.

Becky bit her lower lip and tried to control her breathing. She brushed her hand against the swollen monster and the contact of skin on skin made her gasp out. Paul's cock swayed slightly so she reached out to steady it, pulling back the foreskin slightly, delighting at the feel of this wonderful specimen of manhood. And it was her son's. She felt so proud. She pumped the foreskin forward slightly, then back, then forward again.

Paul moaned in his sleep and she thought, Oh God, I'm wanking my own son.

The question was never answered because Paul woke up.

She looked at him but her eyes seemed glazed and she soon stared at his dick again as she jerked him off. Paul couldn't believe it but he wasn't going to stop her. Why the hell should he? She was beautiful and she had the biggest pair of tits he had ever seen. And what she was doing to him was fantastic. He could never hope to fend a sexier woman than his mother.

"I can't stop looking at it, Paul," she said. "It's so beautiful. I've been struck by cocklust."

He'd never heard his mother speak like this before but hearing those words come out of her mouth made him even hornier.

She looked at him and smiled. "You want to see my big tits, don't you, you naughty boy? You want to see momma's big titties while I play with your cock." She stood up and started to undo the studs of her nurse's uniform. Paul waited with mounting excitement. After all these years he was finally going to see his mom's huge tits! She snapped open all the studs and let the uniform fall to the floor so that she stood before him in white bra and panties. The bra was huge but even so it strained against its load. His mom's body was curvy and the flare of her hips and thighs turned him on almost as much as her tits.

"Do you want to know how big my bra is, son?" she asked him.

He nodded. What he wanted most was for her to take it off.

"I'm a 42GG," she said. "And tonight, they're all yours." She reached back and unhooked the bra and her gigantic tits sagged out. They sat proud and full on her body, each tipped with a large brown aureole and erect nipple.

She came forward and he watched their heavy swing as she knelt above him, straddling him on the bed. She pushed her tits at his face and he licked at them, his tongue tasting her soft breast flesh and the even softer aureoles before he took a hard nipple into his mouth. She cried out as her nipple entered his mouth then moaned, "Yes!"

Paul ran his hands down his mother's back to the top of her panties. He hooked his thumbs into them and pulled them down over her thighs. "Yes," she said, "I want to show you everything." She lifted her knees to let him remove her panties altogether. He looked down between her legs at her dark hairy pussy. Paul had a thing about hairy pussies as well as big tits but he would never have guessed that his mother's pussy would look so good. She ground it against his lower stomach and he felt her hot wet lips on his groin.

He reached around her to feel her ass and she felt lovely and soft there. Paul ran his hands down over the swell of her bottom to the backs of her thighs. She moaned out and said, "Okay, what are we going to do? How do you want to take me?" Her huge tits heaved with her heavy breathing.

She nodded and reached between her legs for his cock. She encircled his shaft with her fingers then guided him into her. Her tight wetness gripped him and he cried out as she started to lower then raise herself, impaling her body on his cock. He watched her beautiful titanic tits swing and sway sexily and he watched his mom's face contort with ecstasy, eyes closed and mouth half open as she took his big cock inside her. She gyrated her hips against him and they both gasped at the sensations as her pussy muscles went to work on his manhood.

She slammed her pelvis down harder on him, taking him all the way inside her. "Oh God, my son is fucking me! My son is fucking me with his beautiful cock!" Tiny beads of sweat broke out on her face, neck and chest. Paul kept his hands on her furiously pumping ass and watched her tits while he enjoyed the sensations of her tightness enveloping him. He wasn't going to last too long like this...no man could.

"Paul, that was fantastic."

He nodded, catching his breath.

"I have to go do my rounds now. darling, but I'll be back soon."

Paul smiled at his beautiful mom. He was already excited about her return... End