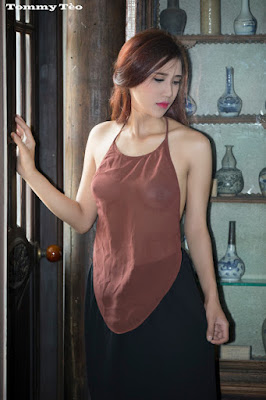 My family was brought up with the ideal that nudity was different than sex. Me, my sister, and my parents could all be naked around each other and it wasn't sexual, it was just the way we were. We weren't nudists, though, we didn't go to nudist colonies or nude beaches. But when we were at home, we would relax by taking off our clothes.


When my sister and I were little, there was no problem with that. I liked being naked, and so did my family. But when I advanced into the teenage years, I began to feel differently about our mutual nudity. I didn't dislike it by any means, in fact I started to really enjoy it. After I started getting erections, I thought maybe my parents would sit me down and lecture me about the difference between nudity and sex.

But instead, they didn't say anything about it. In fact, whenever I got a hard-on, they seemed to either ignore it or be amused by it. It was confusing, but as long as they didn't mind, I couldn't help it. Especially now that my sister had developed into quite a specimen.

Kathy, or "Kat" as we called her, seemed to turn eighteen overnight. She had always been skinny, which was unusual for girls as short as she was. But after she hit her peak height, the rest of her seemed to start filling out just right. She wasn't what I would call thick by any means, in fact she was very toned and athletic. And her constant nudity had allowed me to appreciate her sculpted curves as well. She had the greatest ass, and fairly generous breasts. In that way, along with her good looks, she took after our mother.

I took after our father, who was good-looking and nicely built too. Even though I was only nine months older than Kat, I think that I had developed faster, which was unusual for boys. But when Kate finally filled out and grew real breasts, she seemed to strut around the house like she wanted to show off to everyone.

That had the usual effect on me, and I found myself having straining erections everytime she bent over or leaned close to me. Like our parents, she never seemed bothered by it, in fact I think she felt embarrassed or flattered, because she always smiled when she saw my hard dick. Sometimes I think she would bend over right in front of me on purpose, giving me a splendid show of her ass or her heavy breasts swinging right in front of my face.

I had to fight the urge to reach out and grab them, and it was hard when she was constantly naked around me. I often wondered if seeing my hard dick aroused her, since I knew she was still a virgin and wasn't dating anyone. In fact, I was pretty sure that me and dad were the only guys she had ever seen naked.

Along with the nudity, our family had always been into mutual bathing. We didn't have a giant bathtub that we all got into together, but it wasn't uncommon for my sister to ask me to wash her hair for her, or for mom and dad to take a bath together.

This was when things changed, at least for me. Over time, mom and dad became more open with their affection. They were always touching each other, ever since I could remember. But I think that when Kat and I were "of age", they felt that they could display more of their sexuality to us.

That was weird at first, because the first instance that I remembered was walking in on them having sex in their room, and they saw me and didn't stop. We never really closed our doors, since there was nothing to hide, except for the occasional masturbatory session, which I would conduct in the bathroom. But we would never do anything sexual around each other. In fact, I never really knew if Kat masturbated or not, it just wasn't something that our family shared with each other.

So there I was, standing there in our parents' bedroom, watching them fuck. They were humping each other when I walked in, and they turned their heads when they heard me. They just smiled at me, and then returned their focus to each other. Dad was grunting as he thrust himself into mom, and mom moaned and whimpered.

I just froze, and felt like I wasn't even really there. But when mom had an orgasm, which I could identify by her screeching and clawing at dad's back, I started to get hard immediately. Dad was not far behind, and he thrust himself as deep into mom's pussy as he could and just held himself there as he spasmed. When they were finished, they pulled away from each other and looked over at me again. I couldn't help but stare at mom's pussy, which leaked some of dad's semen.

"Enjoy the show?" mom asked, letting me stare at her pussy.

"I think he really enjoyed it," dad said, nodding to my rock hard dick. "Why don't you go take care of it, son."

For some reason, I hurried out of their bedroom and disappeared into the bathroom, where I planned on following my dad's advice. It was like an instinct, and for some reason I instantly complied with it.

Great, my sister needed to use the bathroom and I was in the middle of jerking off. We had always been comfortable sharing the bathroom, and I couldn't very well tell Kat to go away, since we had never locked each other out before.

I still wasn't softening, but it wasn't like she never saw me with an erection. So I unlocked the door and she came bursting in. She didn't even bother looking at me before she hurried to the toilet. She was naked of course, and that wasn't helping me calm down.

She relieved herself, and even the sound of her urinating was kind of turning me on. I felt kind of ashamed, especially when she finally looked at me and saw my throbbing dick. She realized why I had locked the door, and couldn't hold back her smile.

"What were you doing in here?" she asked wickedly, still peeing.

I blushed, but there was no use in denying it or turning away.

"Nothing," I said sheepishly.

Kat finished going, and after flushing went to the sink to wash her hands. Then she turned the faucet off, dried her hands, and hopped up onto the counter. She sat there and stared at me, still smiling.

"What?" I said in shock. "You don't honestly expect me to do that in front of you."

She giggled. "Why not? Pretend I'm not here."

Despite my embarrassment, I was still very erect.

"I saw mom and dad having sex," I said, as if trying to explain.

Kat laughed. "And that turned you on?" she said in amusement.

Kat's smiled widened. She was getting a kick out of this, I could tell. She opened her legs and spread her pussy lips with her fingers right in front of me.

"You mean this?" she said mockingly. "I have one too, you know."

She just laughed, but she didn't close her legs. "You don't seem to get all flustered when you see me naked."

I was so embarrassed, but I felt like I had to tell her. I just nodded.

"You're always naked around me and bending over, and I can't help it."

I nodded. She seemed aroused thinking about that.

"Did they see you?" she asked.

"Yeah, they told me I should go relieve myself."

Kat burst out laughing, and it put me at ease. She was so hot sitting on the counter, with her legs spread and her breasts pushed out as she leaned back on her hands. She stopped laughing and saw me staring at her body.

"So go ahead," she said. "Relieve yourself."

"You can look at me if you want," she said, with a kind of softness that told me she was very aroused by the thought of me watching her while I masturbated.

"Do you want me to talk while you do it?" Kat asked in her sensuous voice.

I only nodded, entranced by her body as I jerked off.

"Sometimes I think about you," she said, her eyes fixed on my masturbatory movements. "I love it when you get hard because of me. I like seeing your hard dick, and sometimes I imagine what it feels like. And even sometimes, what it tastes like."

I just stood there with my dick in my hand. Kat started to really rub her pussy, spreading her lips and playing with her clit. It was so hot watching her do that, and she started moaning and whimpering just like mom.

Her breathing became erratic, and suddenly she started spasming, arching her back and curling her toes. She whined and bucked her hips as she climaxed, gyrating around on the countertop as she came. Finally, she relaxed and sighed, smiling at me.

Kat hopped off the counter and went to the bathtub. "Join me?"

I nodded stupidly, and stared at her ass as she turned her back to me. She leaned over the edge of the bathtub and turned the water on, and I walked up behind her and pressed my hard cock between her ass cheeks. She purred and wiggled her butt against me.

"You're ready for more already?" she smiled. "Do you want to fuck my ass cheeks?"

I replied by sliding my dick up and down her crack. Since we probably wouldn't actually fuck, at least not yet, we would probably do everything else until we were ready.

We both got into the tub when it was full, and I washed Kat's body. This time, it wasn't just her hair. I washed her everywhere, her front and her back, and every nook. Kat washed me too, and seemed to spend a lot of time cleaning my rock hard penis. She loved the way it felt, and when she didn't stop washing me, I took that to mean she was trying to jack me off.

I let her do whatever she wanted, and she was really good at it. Before long, I tensed up and came, shooting sperm all over myself and her. She milked every drop from me, and after we were clean again we just rested against each other.